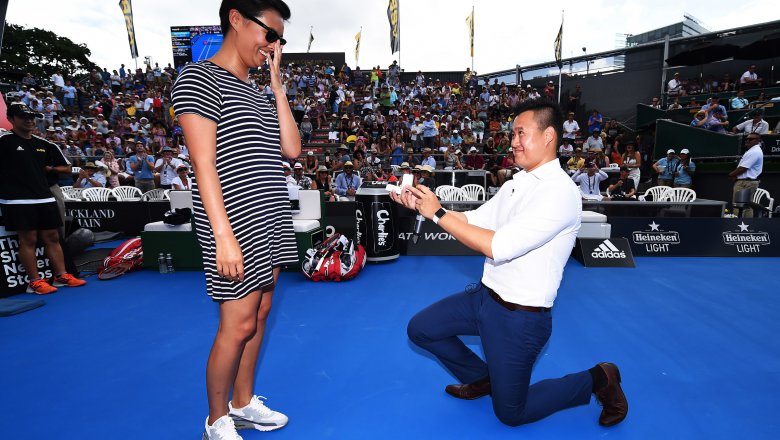 Today at the ASB Classic Moët & Chandon, together with Naveya & Sloane, helped one man pull off his dream proposal to his girlfriend of fifteen years, and she said yes!

Ralph Chang, 30, got down on one knee and proposed to his girlfriend of 15 years, Cathy Qin, 30, on centre court in front of hundreds of people before the David Ferrer vs Jack Sock match. It was the first time a fan had proposed on centre court during a New Zealand ATP event.

“Today was a dream come true. I have always known that I wanted to do something special and unique when it came to proposing to Cathy, and have been thinking about the execution for a long time. I couldn’t have done it without the team at Moët & Chandon and Naveya & Sloane, they were instrumental in helping me pull it all off” says Chang.

Ralph was initially in talks with Naveya & Sloane regarding the design of the engagement ring, when he started sharing with them his vision for a unique proposal.

“From the moment we met Ralph we were drawn to his enthusiasm and devotion to not only designing a beautiful engagement ring for Cathy but to creating a proposal that she would never forget. When we started talking through his proposal plans we thought we could possibly help him further” says Naveya & Sloane Co-Founder, Rachel Sloane.

“We love hearing about our clients’ proposal plans and do try to help out where we can to make it a really special experience. As we knew we were already involved with the ASB Classic, an on court proposal seemed like a unique idea that Ralph would be excited about.”

Naveya & Sloane were already working with Moët & Chandon on a promotion at the Moët & Chandon Champagne Lounge which gives ASB Classic tournament attendees the opportunity to win a bespoke champagne diamond ring worth $20,000, so it made sense to invite the brand to get on-board.

When Moët & Chandon heard about Ralph’s proposal idea they were thrilled to have the opportunity to help bring the idea to life. “Given our close relationship with the ASB Classic over the last 3 years, we knew that we could help make the proposal happen. It has been an exciting couple of months working closely with Ralph to pull off the ultimate proposal, a New Zealand first in fact! We wish the couple all the best” says Moët & Chandon Senior Brand Manager, Rai Banbury.

While Cathy, had no idea of the proposal, her friends were responsible for getting her to the stands under the premise that she was about to watch the Ferrer vs Sock game.

“Given the scale of the proposal I had a lot of help, with several different parties involved. It was nearly impossible to keep this a secret!” says Chang.

The couple enjoyed an impromptu celebration in the Moët & Chandon Champagne Lounge directly after the proposal.

Moët & Chandon have confirmed that they will also be sponsoring the couples wedding with 60 bottles of champagne.

Guests at the ASB Classic can go into the draw to win their very own bespoke Naveya & Sloane champagne diamond ring by simply purchasing a flute at the Moët & Chandon Champagne Lounge during the tournament.